Recommended Artist: Explosions in the Sky 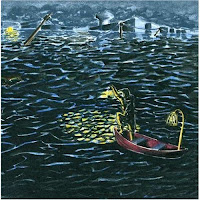 If you are looking for some good music to meditate to check out All of a Sudden I Miss Everyone.
Posted by The Captain at 6:58 PM 30 comments:

Chewing Gum has a pretty awesome post on Filter's Top 10 Albums of 2008. There are a few beauties on their that I am glad will get more exposure.

Album Review: Port O'Brien - All We Could Do Was Sing

Port O'Brien is an folk indie rock band from California. I first heard of them during my interview with Kelly Winrich of Delta Spirit. Their album All We Could Do Was Sing was originally released May 13th, 2008 according to their website (Wikipedia reports 2007 with no source) and distribution on Amazon began today. The album caught my eye when I remembered Winrich's recommendation.
Side Note: Interestingly enough I first listened to this album on the road to Austin, TX to see Delta Spirit at Emos in Texas' great capital city. Their bassist had been arrested for having his mom's prescription drugs on him on the way to their show in the Dallas/Fort Worth area (my fine home). They had to cancel their show. I couldn't miss them, so the Captain had no choice but to set sail.
My first instinct when listening to this album was that you have to be in the right mood. If you are looking for energetic uplifting music you are not in the mood. If you are looking for chill music you can sit back and smoke (candy cigarettes of course!) to then you are in the right mood.
The album begins with a happy anthem "I Woke Up Today" that features a chorus of the band's voices. It follows that with a much more subtle and passive song "Stuck On A Boat" with a rich folk flavor. The next song "Fisherman's Son" takes off where the first track ended with a chorus of voices. The sound of the chorus is comparable to The Polyphonic Spree (without the orchestra of ROCK!). Song #6 "Alive For Nothing" has a very sweet acoustic groove to it. If you aren't catching on, this album offers a lot of variety. It gets and keeps your attention.
I like Kelly Winrich's taste in music.
Vocals - 100%
They may not sound like Pavarotti or Mannilow but this band's vocals are perfecto for the music. It is a passive, almost lazy but fun sound.

The creativity in the album in oozing out at the seams.
Melody - 90%
The melodies are superb. Each song has a chorus you can sing along to.
Production - 85%
This is a hard thing to grade. The production is purposely rough to match the music. For the most part it does, but a few tracks I think go too far. "Valdez" is an example.
Overall - 89% 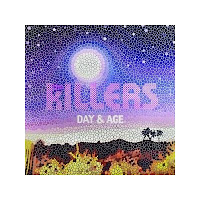 Do you remember when The Killers self-debut album Hot Fuss was released? The band caught on like wildfire, becoming one of the most popular bands of 2004. I loved this album and was addicted to it. The first 9 tracks were brilliant and the cd was hardly ever taken out of my car stereo.
Because of my addiction to Hot Fuss I was very excited when Sam's Town was released in 2006. While there were great songs on this album I was disappointed that they moved away from their "dirty" sound; with less keyboards, electronic music, guitar, and replaced with a more generic sound.
The Killers became an anomaly to me. While most bands become more complex the longer they play together Sam's Town and the B-Side album Sawdust indicated that the band's sound was becoming simpler. Some may appreciate this, but I missed the days of Hot Fuss.
While listening to their new release Day & Age I was even more perplexed. The album was even simpler than Sam's Town. There is a lot of keyboard on the album, but very little bass and guitar. The sweet beats that I loved on Hot Fuss are completely gone.
Maybe it is a good album, and my longing for their original sound prevents me from truly appreciating it.

Brandon Flowers is a good singer. There is no doubt about this. However, his voice is the main contributor to The Killers evolution to a simpler sound. On Hot Fuss Flowers talked, sang, screamed, etc. But on Day & Age his voice is very straightforward and unchanging.
Instrumentation - 70%
I like keyboards. I don't like songs in which simple keyboard is the main instrument. What happened to the guitar, bass and drums of The Killers?
Creativity - 70%
Again, maybe I'm just not appreciating it because I want something else. But the songs are too simple to score them high on creativity.

While simple, there are still some really great melodies on this album.
Production - 90%
The production of the album is extremely clean.
Overall - 78% 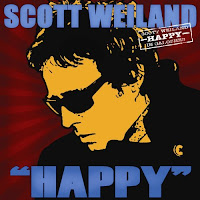 I have to admit it - I'm a Scott Weiland homer. Growing up in the 80s and 90s I was a huge STP fan. I enjoyed his 1998 solo album 12 Bar Blues. Instead of making music similar to the alternative rock sound of STP the album offered a variety of tempo, sound and instrumentation. Much of this can be attributed to the producer Blair Lamb, but as co-producer and artist I admired Weiland's work.

STP went on hiatus and Weiland joined Velvet Revolver. I will be blunt - I hated their music. Stripped creativity and testosterone rock is how I would describe their music. I believe that Velvet Revolver was more of a project to assemble rock legends for money than to create true music.
With this in mind I was cautious but hopeful when I learned that Weiland would be releasing another solo album. I couldn't help but get excited when I received my copy. I was longing for a trip down memory lane enjoying what made 12 Bar Blues so good.
Disappointment. Happy in Galoshes simply sucks. While listening to the album I couldn't help but feel sorry for Weiland. Had the years of hard drugs and Velvet Revolver stripped Weiland of talent?
Vocals - 60%
If there was one thing Weiland could contribute to his solo project it would be his vocals. Unfortunately, this is the worst part of the album. Known for the raw energy and emotion in his voice, Weiland sounds like a washed-up Brian Wilson.
Instrumentation - 70%
I hate the music. I only give it 70% because I assume there are some that like a harder beat and heavy guitars.
Creativity - 40%
I have no idea what the inspiration was behind Happy in Galoshes. Was Weiland trying to make a Velvet Revolver album without the band? I'm sad to say that as bad as Velvet Revolver was, the creativity on Weiland's solo album is worse.
Melody - 80%
There are some catchy melodies in this album. But when the music is crappy do you really wont those melodies in your head?
Overall - 62.5%
I can sum up this album by recommending that Scott Weiland focus on STP's music for the rest of his career. That is, if he is still even good enough for them.

Check out these blogs I found!

Whatever Takes Your Fancy

First Order Historians
Posted by The Captain at 10:15 PM 6 comments: If you like Stereolab but wish their music had a little more structure than Anathallo's new release Canopy Glow is for you.

Just as Stereolab features a large lineup of multi-instrumentalists Anathallo consists of musicians playing guitars, non-traditional percussion, flugelhorn, autoharp, trombone and much more.
The vocal combination of Matt Joynt and Erica Froman gives the music a nice indie taste. The instrumentation is creative but still structured enough to sing to. If your impression is similar to mine listening to Canopy Glow is equivalent to finding a diamond in the rough. With a week that included Nickelback and Wu Tang Clan, Anathallo is our saving grace.
Vocals: 85%
Instrumentation: 95%
Creativity: 95%
Melody: 85%
Overall: 90%

My apologies for not posting the past couple months. At the very least I want to direct you to the latest and greatest posts.